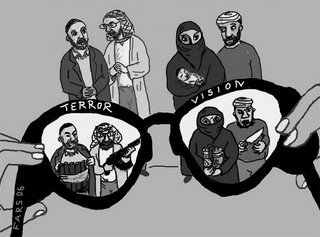 Posted by The Comic Torah at 8:18 AM No comments:

Posted by The Comic Torah at 8:19 AM No comments:

The Chicago City Council is considering renaming a one-block section of an inner city street for murdered Black Panther Party leader Fred Hampton. The move is wildly controversial and the Chicago Police union is outraged that the city would honor a man who encouraged his followers to "Off the Pigs."

Remembering the Black Panthers, I understand why Palestinians voted for Hamas. First of all the headgear. The Panthers wore these tres cool berets just as Hamas leaders sport totally fashionable Islamic resistance baseball caps. But more importantly and even more fun, both the Panthers and Hamas behave like men. Like Palestinians on the West Bank, we on the west side of Chicago in the 1960's understood how violent and well-armed are our opponents, in our case the Chicago Police Department. Hardly a young man among us had not been harassed by cops for the sometimes capital offense of "driving while black." All of us who protested against segregation had been photographed by people we took to be cops and FBI agents out to intimidate us. But the Panthers behaved as if they were not afraid. They had their little shot guns and their little pistols. The Panthers were way into their second amendment rights. They were fools. Fred Hampton and Mark Clark were ultimately gunned down in their sleep by the axis of evil government agencies. But for a hot minute there, the Black Panther Party - they stood up to the bad guys. They were not trying to get along with injustice but shove it out of the way. They did not ask for acceptance. They demanded respect.

They appealed to our idealism. The party platform quoted the declaration of independence. They were the strong right arm of our ideals. Betcha anything that's how Palestinians feel about Hamas. Like us about the Panthers they say, "Call 'em terrorists, call 'em whatever you want but you can't call them late for the revolution. They're here, they're on our side and standing up for us. And besides, they got great headgear.”