UK's Cameron Resists Calls For Airstrikes Against ISIS Despite Hostage Killing
Posted by The Comic Torah at 5:48 PM No comments:

Vision - Light and Neuronal Activity - YouTube
Posted by The Comic Torah at 4:17 PM No comments:

Ronald Reagan says if aliens attacked the earth all our supposed differences would vanish in the common struggle for survival.  Prof. Haidt is working hard to find ways to help us overcome our partisan (psychological) differences.  This TEDTalk points to issues wherein the politics of for example, Grover Norquist and me are in significant agreement.  To tell the truth, I LIKE believing I am in an important sense on Grover's and George Bush's team!

Jonathan Haidt: How common threats can make common (political) ground - YouTube
Posted by The Comic Torah at 8:14 AM No comments:

Occupy The Cage! – Capuchin monkeys reject unequal pay | INCISITY
Posted by The Comic Torah at 6:31 AM No comments:

Can you imagine the stones it took back in the day for a man to create a record of himself and his boyfriends?  While it is absolutely true that nothing is visible in these photos save affection, I think you have to beat your imagination with a sledge hammer to not recognize these boys as gay.

Male Affection in Vintage Photos » Sociological Images
Posted by The Comic Torah at 4:52 AM No comments:

Even long distance, video drone warfare messes with a pilot’s mind, man. | INCISITY
Posted by The Comic Torah at 4:20 AM No comments: 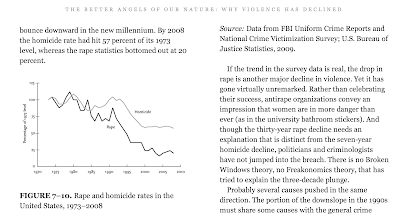 Statistics Show Drop In U.S. Rape Cases - Washington Post 6/19/06
"Overall, there has clearly been a decline over the last 10 to 20 years," said Kim Gandy, president of the National Organization for Women. "It's very liberating for women, in terms of now being able to be more free and more safe."

The Decline of Rape - LA Times 02/08/07
he U.S. Justice Department's National Crime Victimization Survey (considered our best measure of crime because its anonymous surveys capture offenses not reported to police) reports that rape has been falling dramatically for decades. The first survey, in 1973, estimated that 105,000 females, ages 12 to 24, were raped that year. In the 1980s and early 1990s, the survey was expanded to include sexual assault and attempted or threatened offenses. Even so, the latest survey (in a young female population 1 million larger than in 1973) reported that 30,000 females, ages 12 to 24, were raped and 60,000 were victims of attempted rape or real or attempted sexual offenses (including verbal threats) in 2005.

The Startling Decline in Rape - Washington Monthly 6/3/11
This is an astounding decline, but I don’t know of any reason to doubt the accuracy of the numbers. The National Crime Victimization survey is conducted twice a year, with a sample size of 134,000. Rapes reported to the police have been shrinking more slowly than survey-reported rapes, and actually rose from 1979-1990, consistent with other data showing an increasing willingness of victims to report having been raped.

This article could make you grateful for infanticide!

Why They Kill Their Newborns - By Steven Pinker

Posted by The Comic Torah at 2:00 PM No comments:

Auge plan There are a number of high-mortality pathological conditions (currently 69[5]) that have special guarantees for both Isapre and Fonasa affiliates. The Auge (from the Spanish Acceso Universal con Garantías Explícitas, "Universal Access with Explicit Guarantees") or Ges (Garantías Explícitas en Salud, "Explicit Guarantees in Healthcare") plan includes four guarantees in relation to these illnesses:[4] Access: individuals will be able to get attention from a network of providers near their place of residence, Opportunity: there is a maximum pre-established time limit to get attention (both initial attention and after the diagnosis), Quality: services will follow technical requirement standards that will be established based on medical evidence, and Financial coverage: payment to providers cannot be an obstacle to attention. There will be a maximum copayment of 20% of the cost, with the total not to exceed one month of income for the family in a year. [ "Few people realize that end stage renal disease is a disease for which we have universal coverage, irrespective of your age right here in the United States... The principle of covering everyone for serious diseases is already well established...  one way we could have had universal health insurance in this country was to extend the number of organs covered.  Imagine if we covered the heart and the liver".

"The composite rate is intended to cover all operating and capital costs that efficient providers would incur in furnishing dialysis in outpatient facilities or in beneficiaries' homes. The base composite rate as of 2006 is $130 for freestanding dialysis facilities. Medicare caps its payments to facilities at an amount equal to three dialysis sessions per week. Although home dialysis may be given more frequently it is not fully reimbursed by Medicare." Wikipedia - End Stage Renal Disease Program
Posted by The Comic Torah at 2:00 PM No comments: